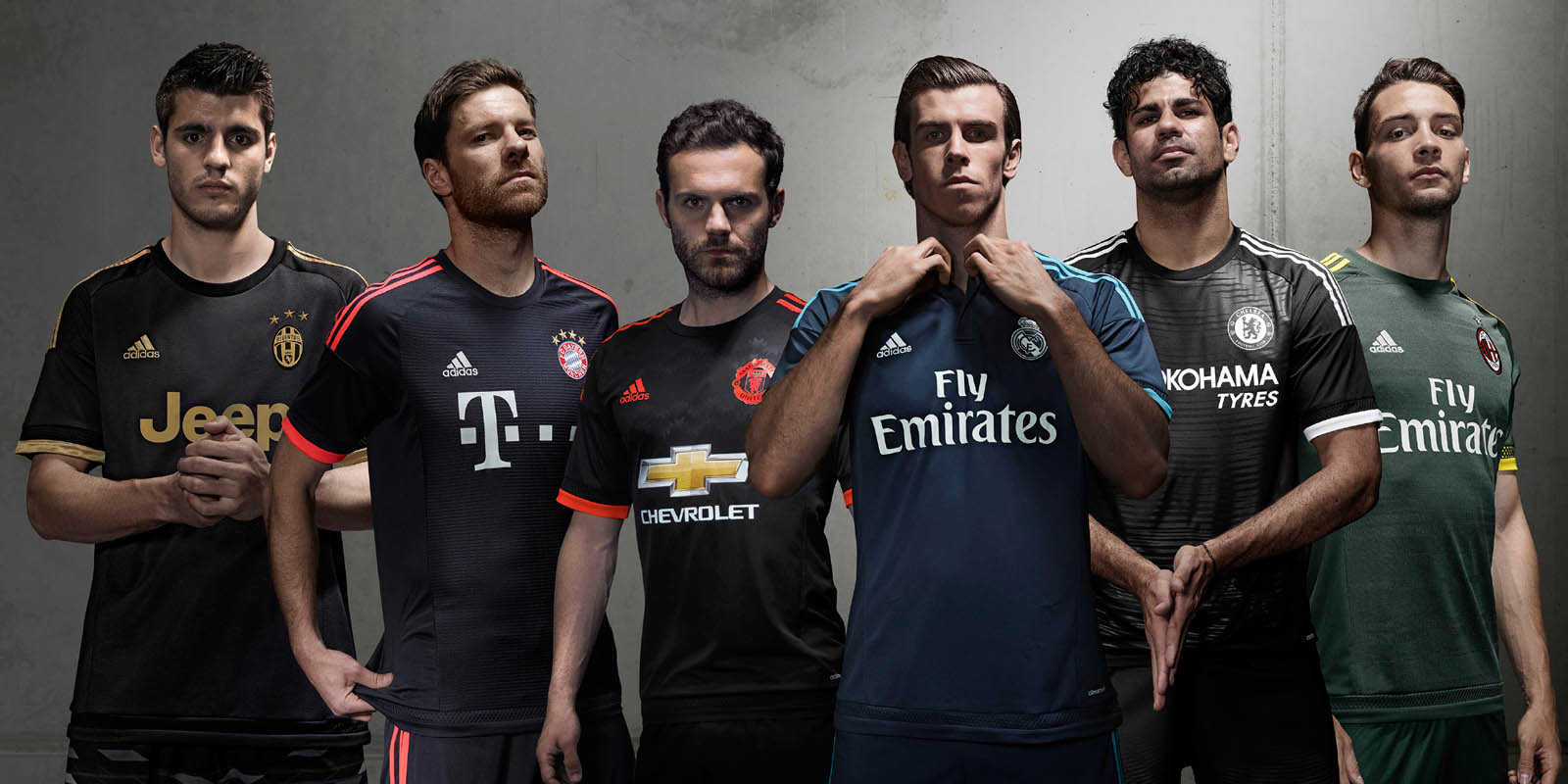 What is the future of kit sponsorships?

A conversation with a friend from the sports industry, and the trends that we saw this year made me think about the future of kit sponsorships. In this article, I will try to share my view on this topic, and it would be great to hear yours as well.

In recent history, only two brands dressed the top European football clubs – Nike and Adidas. But this year could be the turning point in the entire industry, and it’s not only because of these famous sports manufacturers, but because clubs obviously need more money.

Almost all TOP flight clubs had contracts with Adidas and Nike, and the biggest sponsorship was below €30M per year. But then, without explanation, Adidas snatched Manchester United from Nike with an unbelievable offer of €98M per year for 11 long years.

“Most soccer historians credit Peñarol, a Uruguayan club team, with introducing the concept of jersey sponsorship to the sports world during the 1950s.” – Scott Allen, Mentalfloss

million euros Real Madrid gets from Adidas every year

At that moment, Nike refused to compete with such amount of money. After a 13-year relationship with United, they said: “…at the time that the partnership no longer represented “good value” for the company’s shareholders.”

When you know that United sold more than one million shirts, the Adidas investment might make a little more sense than it did at first. Nike took a big hit by losing a 13-year partner to his biggest rival… 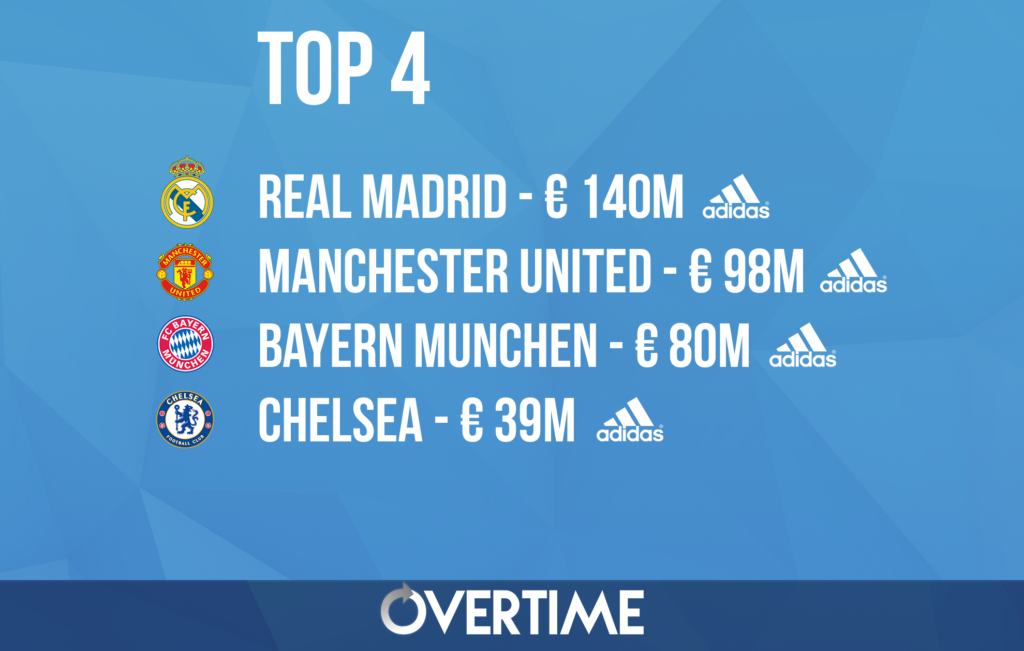 This contract also made some other clubs very unhappy, especially Real Madrid. The Spanish giant wanted a better contract than United, and this could only mean more than €100M per year. And they managed to do so as they negotiated a crazy €140M per year! For 10 years!!!

We cannot forget about Bundesliga’s Bayern Munich, a “must have” player for Adidas. The agreement between these two is worth €900M, and it will last until 2030, which will ensure €80M per year for the Bavarian club. And if you add Chelsea FC’s contract with Adidas worth €39M per year for 10 years, you can see that Adidas has the TOP 4 kit contracts in the football World, spending over €357M every year.

On the other hand, you can see that United’s Premier league rival Chelsea gets €59M less per year They wanted to negotiate a new contract with Adidas, but they couldn’t reach an agreement, and Nike took advantage of this. 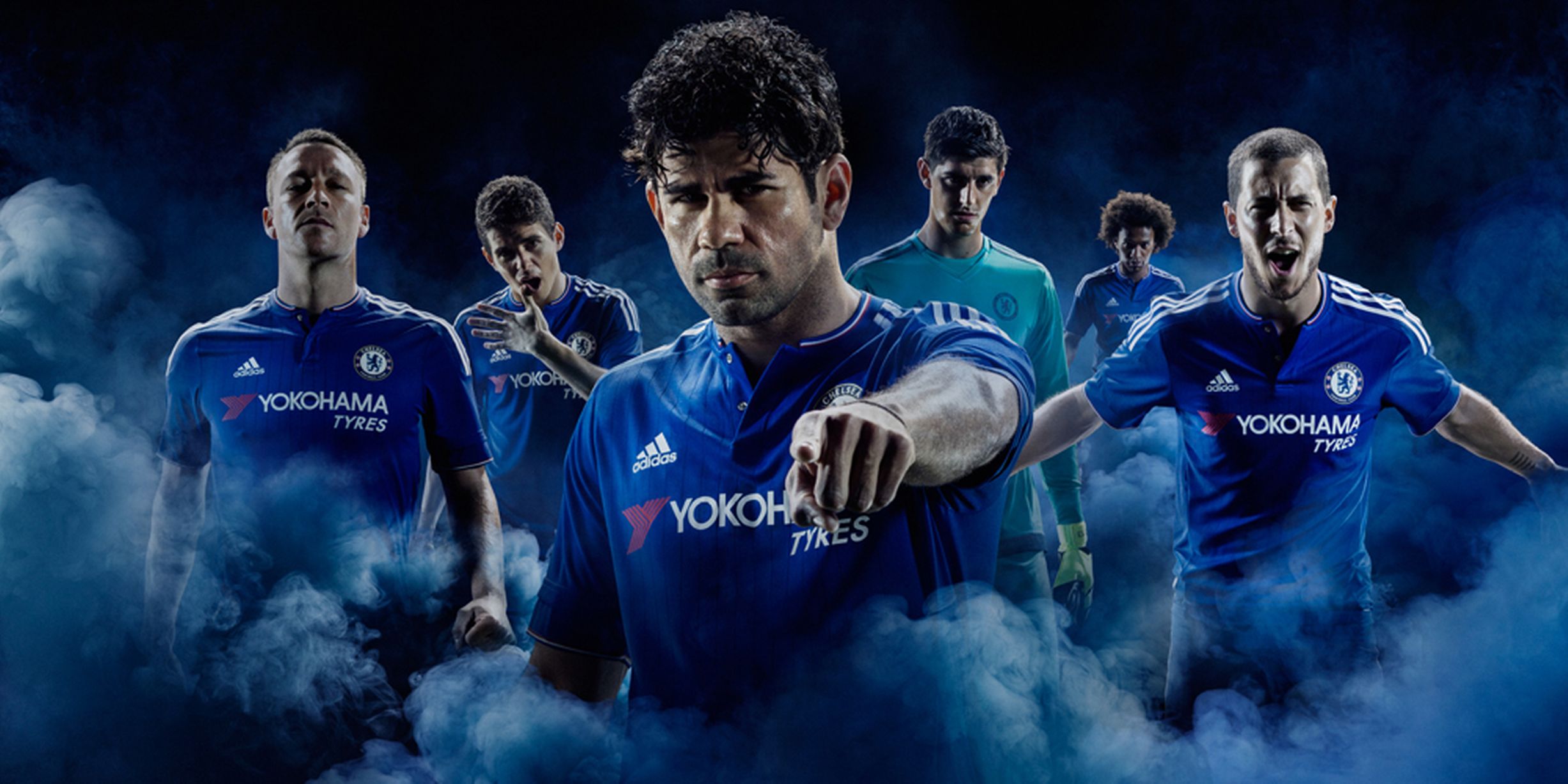 That same Nike, that said doesn’t want to spend ridiculous amounts of money on sponsorships, decided to play this crazy game with Adidas. Nike reached a €70M sponsorship agreement with Chelsea, for the duration of 10 years. The club even agreed to pay Adidas €45M for penalties due to early termination (6 years) of their contract.

And where is Barcelona? They had a contract with Nike till 2018., with around €32M per year. Of course, Nike didn’t want to lose this mega club, and they also offered them a new contract:

“FC Barcelona and NIKE, Inc. have extended their current sponsorship deal, which was due to end on 30 June 2018. The long-term agreement is a landmark in global football and builds upon a highly successful partnership. The details of the agreement will be reported and will have to be ratified at the next Club General Assembly.” – Barcelona PR

Some Spanish media reported that new deal is expected to run until 2026., and that Nike will pay Barcelona €158M per year. If this is true, this is the biggest contract in football industry. 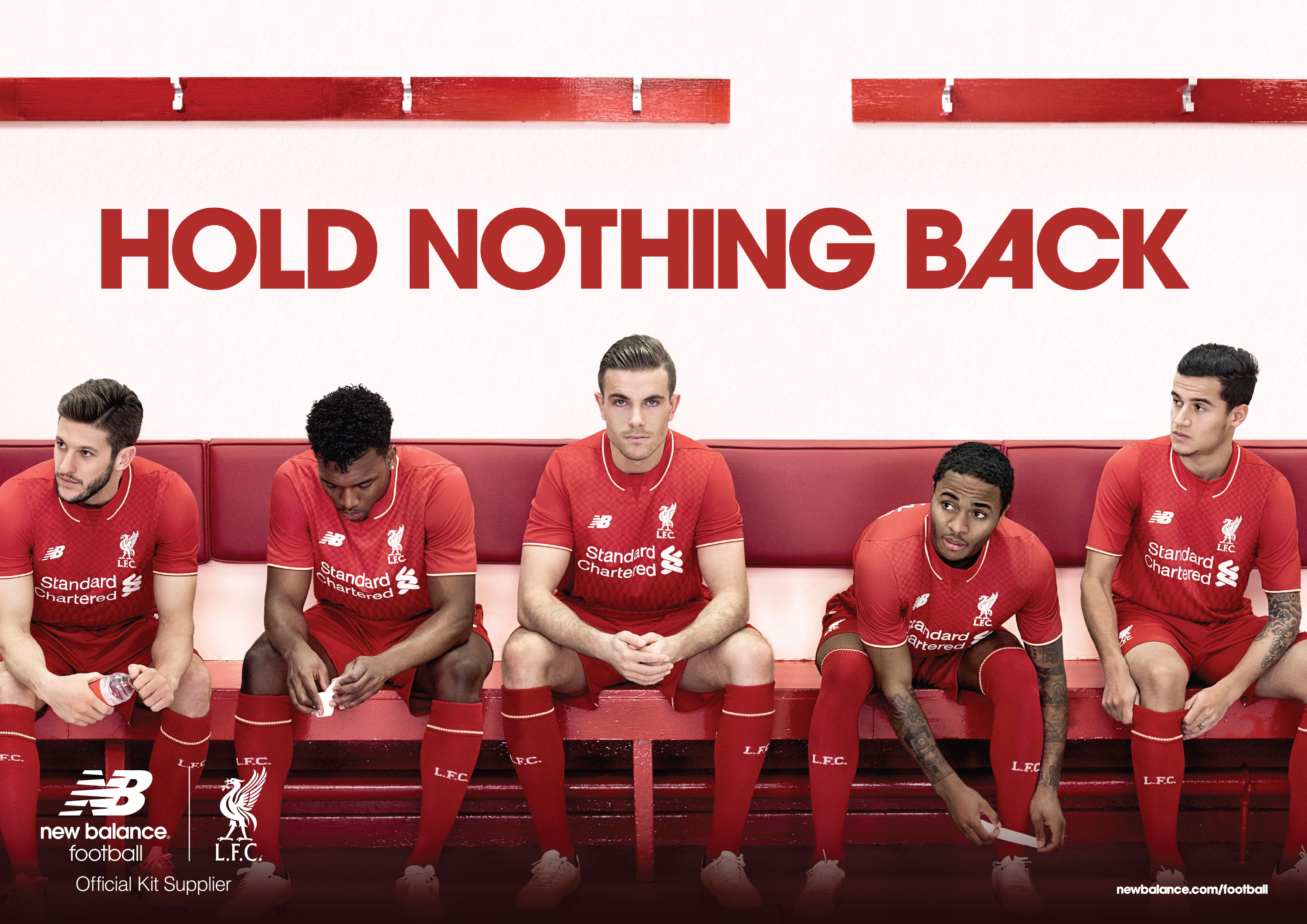 Opportunity for other brands

As you can see, the war between Adidas and Nike allowed for other brands to enter the battlefield  These brands spend big money on TOP clubs, and the sponsorship budget for other clubs is minor. 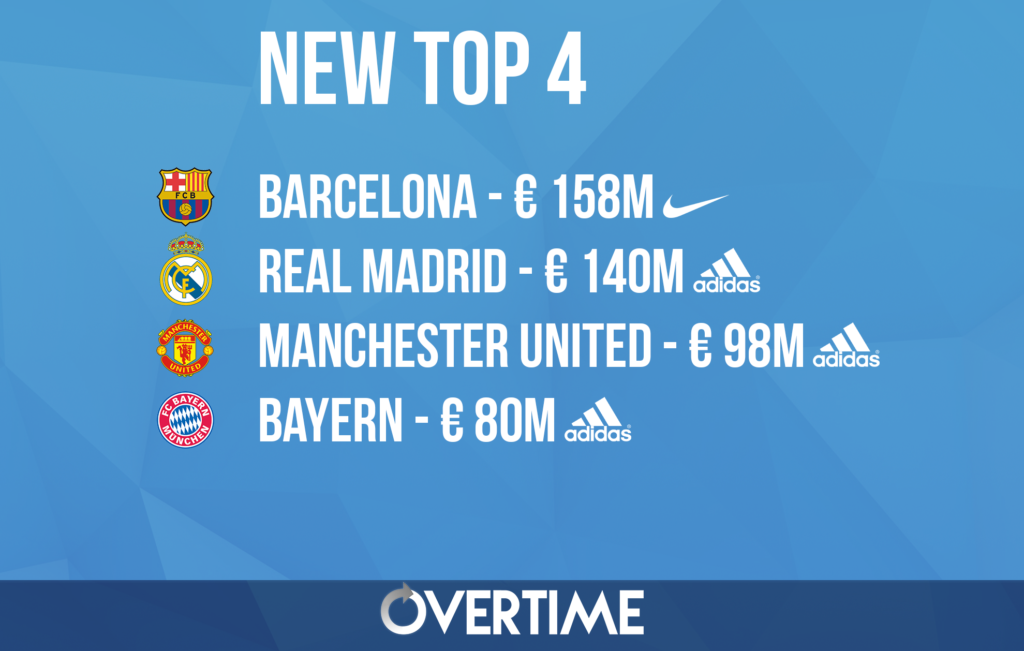 Under Armour, Puma, New Balance, Macron and others seized the opportunity, and offered more money to clubs like Arsenal, Southampton, Tottenham, Lazio, Liverpool, Aston Villa, LOSC… This is a chance for them, to steal a piece of pie with high quality equipment, but equipment itself won’t be enough. They need to give fans more content, and they need better ads, as well as better design, since there is a significant creativity gap between Nike/Adidas and other brands.

In sports business, everything is possible. Adidas, found in 1964, had a 15-year head start on Nike, but that didn’t stop the American sports apparel manufacturer. Nike worked their way to the top with creativity, great content, athletes and sponsorships, and they are at this moment the top sports brand in the world.

I think that this big change in sponsorship policy of Adidas and Nike opened up a whole new market for other brands such as Under Armour (who is ahead of Adidas in the US sportswear market), New Balance, Macron, Joma, Jako, Kelme or others.

But they must improve their efforts, especially in marketing and storytelling. It’s not enough to have great players or products, they have to communicate with fans. A good example can be seen looking at the Spanish brand Kelme. They have a great product and sponsor some Primera clubs, but they still communicate in Spanish language (they don’t care about the international perception of their brand), their social media is focused on the Spanish market and they don’t have marketing materials or instructions for retailers.

Another example is Under Armour, a brand that is very strong in the US, but they don’t have a strong retail network in Europe, and they cannot guarantee worldwide sales for the European clubs they sponsor, which is something Adidas and Nike can.

These so-called smaller brands need some time, but I believe some of them will succeed. Whichever brand manages to get to clubs that Adidas and Nike are not interested in, especially if those clubs have a big fanbase, can step onto “the big boys” territory and take a piece of their pie. 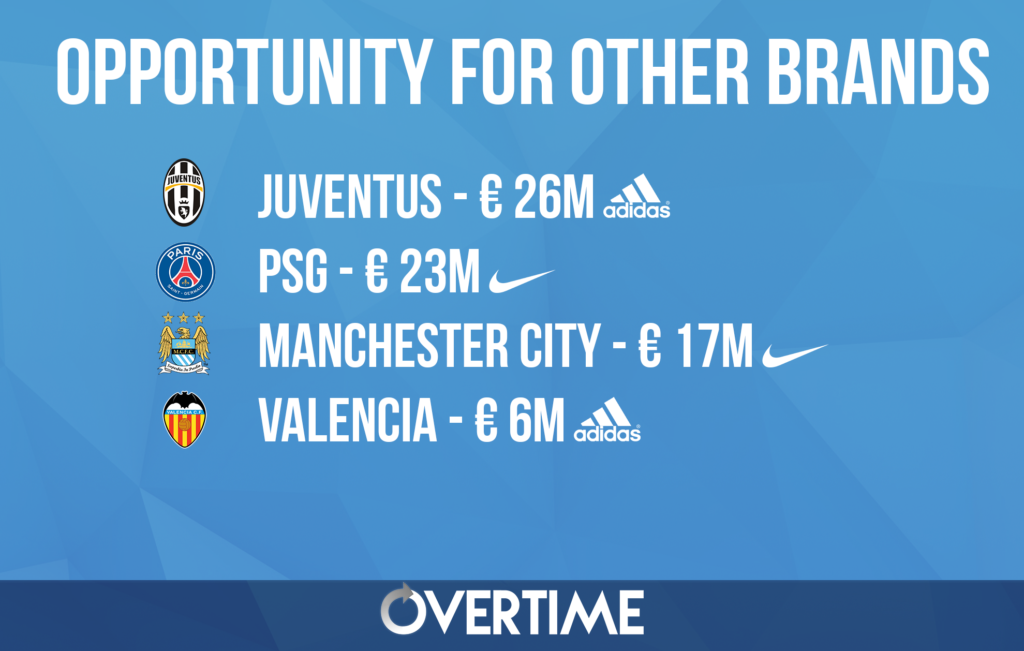 Before I get into conclusion of this article, I would like to discuss another sponsorship issue. Top European clubs have more income from kit suppliers than from sponsors on the kit. This is something that separates them from other clubs, and also a reason why Chelsea decided to part ways with Adidas.

Manchester City is below them on the list, with “only” €17M Nike kit deal, and €46M Etihad sponsorship. All these clubs will try to find kit suppliers that will pay them more than sponsors on their kit.

In my opinion, future will be turbulent. Adidas entered a bidding war with Nike that could create more space for other brands, which could change the sponsorship game quite a bit.

Nike will probably never forget this Manchester United ‘takeover’, and some reports even suggest that they will go to Adidas’ backyard to hit them where it hurts the most. German Football Association reportedly received an offer from Nike they cannot refuse. Losing this battle would be a huge blow for Adidas.

Future? Focus will be on design, content and players. Players and their strength on social media will be crucial, and you can see that Nike (Ronaldo) and Adidas (Messi) have the main football influencers on their side.

Better marketing support for retailers is crucial, in a sense that retailers should get promo materials, education and visuals from the supplier. Nike and Adidas have developed online platforms for this purpose to ensure all their retailers get all the necessary support. This might seem irrelevant, but it is very important and increases their sales.

What do you think? Do you agree with me?

“Three years after the Jagermeister logo, Kettering Town of the English Southern League signed a sponsorship deal with Kettering Tyres and took the field with its sponsor’s name emblazoned across the front of its shirt. When league officials ordered the club to remove the name, Kettering responded by removing the last four letters in “TYRES” and claimed that “KETTERING T” stood for Kettering Town.” – Scott Allen, Mentalfloss

If you have any questions about sports marketing, feel free to contact me at marijan@promoovertime.com