I will once again start an article with a trip to the past. This time it is not to the 90ties, but to 2002, just before the World Cup hosted by South Korea and Japan.

In March of 2002, Nike started a massive $100M marketing campaign called the „Secret Tournament“. It turned out to be one of the most remembered Nike campaigns. Most football fans don’t need a video to remember what it’s all about, the name is enough.

In now somewhat distant 2002, according to Nike, their global revenue, only for football, for the fiscal year that ended on the 31st of May 2002, was $500M. Thanks to the „Secret Tournament“ campaign, that was 24% more than the previous year. Growth in Asia, which was the main target market for this campaign, since the World Cup was held in South Korea and Japan, was impressive 68%.

% Nike revenue growth in Asia after the „Secret Tournament“ campaign

Million People that left golf in the USA since 2004

Number of golf courses closed in the USA since 2006

It was easy to say that this campaign was an all round success. A success of such magnitude that, evenutally in 2003, Nike’s sales outside of the USA were for the first time bigger than total sales in the USA.

This campaign also triggered another growth. As a result of this campaign up to 2,000,000 children participated in „Nike Scorpion KO“ tournaments held in 10 cities around the globe. Scorpion KO tournaments were organized under the same rules as in the games seen in the „Secret Tournament“ ad.

And the new sport started to spread. It wasn’t spread under the name Scorpion KO, but as „cageball“, a sport that was originally invented by the Schalke 04 Gelsenkirchen coach Jörg Berger, while trying to figure out the best and the most practical way to play football indoors.

This sport is similar to traditional indoor football, but it is played inside a cage, which makes it faster, more technical and more dynamic, with minimal amount of rules to make the game more exciting to play.

Sport as such did grow. By 2006 tournaments with prize budgets over $300,000 were held, but the sport itslef remained more or less recreational, played either for fun, or used as a training method to improve technical ability.

What is key for this story, Nike lauched a very successfull and memorable campaign that benefited everybody, and it put a new sport on the map in the process.

Ten years later, Nike did the same. Maybe even better.

Footgolf’s (or Footygolf) beginnings are rather unclear, since it originates from few locations at a similar time, sometime around 2006. The first tournament on a golf course, as the sport is played today, was held in Netherlands in 2008, where the tournament was organized by Michael Jansen and Bas Korsten, and its participants were Belgian and Dutch football players.

In the last 10 years, the ‘real’ golf kept on „losing“ players. According to some sources it is estimated that over 400,000 people left golf in the USA in 2014 alone. The National Golf Foundation did not confirm these numbers, but it did state in its report that about 5,000,000 players left the game between 2004 and 2014. What was even worse, 20% of their current 25,000,000 players in the United States stated they might quit the game in the next 5 years.

Since the interest for golf was dropping and there was no interest in golf from young people, 643 golf courses were closed between 2006 and 2014 in the United States. Only few sports could possibly survive without youth interest, and even though golf seemed to be among those sports, that proved to be wrong. 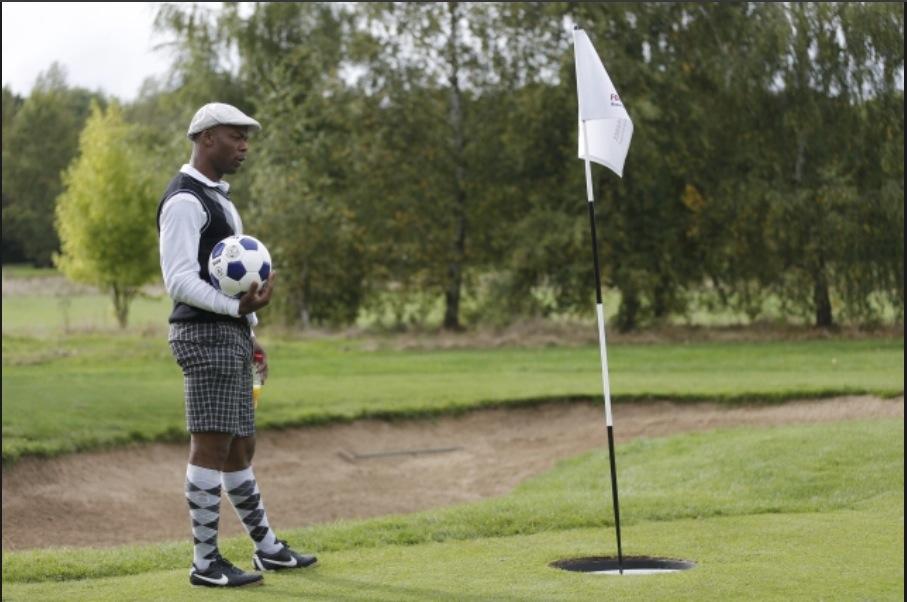 In England, the situation was pretty much the same. Golf club memberships were down 20% between 2004 and 2013. Let’s put these numbers in perspective. In 2004 there were 882,184 golf club members in England. In 2013 that number was under 700,000. This massive drop also caused the closure of dozens of golf courses in England, as it did in the US.

The emergence of footgolf happened at the same time as the golf hit its hardest period in recent times.

US did lose 643 of its golf courses, but it is widely accepted that footgolf helped to keep that number from growing even bigger. Both Professional Golfers’ Association of America and World Golf Foundation have acknowledged that footgolf helped the courses generate more income, and expressed their hope that it could even help golf to gather its momentum and regain popularity among young people

This sudden growth of 2014 wasn’t accidental. It followed this Nike ad in late 2013.

Nike once again succeded in its campaign and once again it helped a new sport grow.

This new „fusion“ sport also grew in South America. As in the United States and in the United Kingdom, golf courses in Argentina also struggled during recent demanding economic times.

Footgolf once again came to their rescue. Jose Luis Chilavert, legendary Paraguay goalkeeper, and former Boca Juniors striker Walter Pico lend their feet in attempt to popularize this new game and save the golf courses.

If you live in a place of the world that offers footgolf or cageball, and since you are reading this I assume you are lucky enough to live near such a place, I strongly recommend that you try and play a sport that is a product of  „Nike’s largest, most globally coordinated effort to date” according to news.nike.com, or in a sport where simply a participation helps another sport to regain popularity.

I’m sure you will not regret it.

“I’ll tell you what — I’m doing FootGolf at The Legends and we’re going to premiere it on May 3. The interest that I’m already getting from the soccer community on the sport is unbelievable… I think the thing that excites me, is that you’ve got the chance here to bring people in who are soccer-crazy and to give them the opportunity to go to the golf course, experience some things at the course and I think it would be ludicrous to think there won’t be a percentage of those people that might say, ‘Hey, you know what? I think I’d like to try and play golf.’” — PGA President, Ted Bishop