I don’t think there is any need to write about the incredible numbers Pokémon GO app has reached in its first few weeks. I presume you already know them, since you are reading this.

I know this is a sport marketing blog, but a phenomenon like Pokémon GO happens very rarely and its success has to be taken seriously. That is the only way to learn from it and maximize a whole new reality it opened the door to. On top of that, it is always a good idea to look at similar event or a hit, through a lens called “how can I get involved”.

There is not a single doubt in my mind that young adults around 30 years of age, like to be reminded of nicer days, when they were kids. Now, most of them are still coming to terms with the fact that they are grown-ups now and that they live in a real world that is going in a unpredictable direction, which can almost impossibly be described as good.

Back when they were kids their problems seemed huge. That same problems are now a funny memory.

Pokémon GO was a great reminder of those days for many millenials, therefore there was no doubt that Pokémon GO will be a hit. I have to admit I couldn’t dare to imagine it will be a hit of this magnitude.

And that is coming from a man that was too old when Pokémon cartoon and playing cards arrived to my homeland. I knew what they were, just that I never participated in any Pokémon relation activity until now.

Now this whole story and idea behind Pokémon GO simply forced me to give it a try.

No, I Won’t Mention Numbers

You know these numbers. You know all those “Two Days”, “Twitter” and “Facebook” related Pokémon GO numbers. We all have heard them.

I’ll just say that so far Pokémon GO has proved to be more engaging than any other popular social app like WhatsApp, Instagram and Snapchat.

In the days of social media and the “Pocket Internet” those numbers meant that anybody anyhow involved with the Internet and social media marketing had to take “Pocket Monsters” seriously.

This is an article that will try to connect Pokémon GO with marketing and try to give some guidelines and preditions.

Marketing and Pokémon – The Beginning

Business locations close to Poké Stops (Pokémon GO places that allow you to collect items such as eggs and more Poke Balls to capture Pokémon) or Poke Gyms (places where you battle other Pokémon users and where you join one of three teams) have experienced a business growth, if they were wise enough to welcome Pokémon GO players.

I will start with a non-sport example. L’inizio Pizza Bar in New York City claims that its sales jumped 75% after they decided to activate a “lure module” feature that attracts virtual Pokémon characters to the store. More Pokémon characters at a certain place equals more Pokémon players at that same location, and it is in human nature that, while they are already at the location full of Pokémon, why not enjoy services and offers that business provides. Services like eat a pizza at L’inizio Pizza Bar or at least check the clothes if a clothing store decides to active a “lure module”.

L’inizio’s manager proved to be right to spend just $10 per day to have extra Pokémon characters placed at his restaurant, that investment is nothing compared to 75% sales growth.

Even if Pokémon GO somehow proves to be just a one season wonder, it will surely start a wave of other augmented reality games. And if a business already proved to be “AR friendly” from the start with Pokémon GO, players will assume that location is a hotspot for other AR games and pay it at least a visit to check out if their assumption is true.

We now live in a world where “imperfect” and “snapchatty” campaigns have excellent online performances. So far even the biggest brands joined these types of campaigns on their official social media accounts, therefore there was no reason to assume they will avoid Pokémon GO. Quite the contrary, as Jeremiah Rosen, managing director at creative agency Reason2Be explains:

“People born in the 1980s and 90s, they grew up with this. It’s approachable and reassuring and that’s why it’s gone from zero to millions of users in just a few days. I see McDonald’s, Home Depot, national brands playing into the culture.”

Big businesses already started their activity in Pokémon GO, so it is not a surprise massive sport brands joined the party.

Pokémon GO goes to the Gym

Sport Stadiums and Arenas are big places, with a lot of people, so logical conclusions suggest there have to be Pokémon characters there. 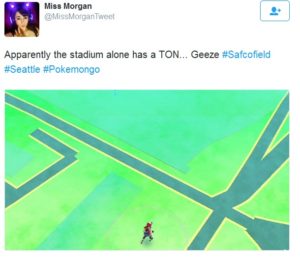 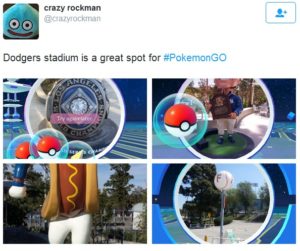 Picture still does say more than a thousand words, so why talk when I can just show you some selected Tweets from the ocean of similar tweets: 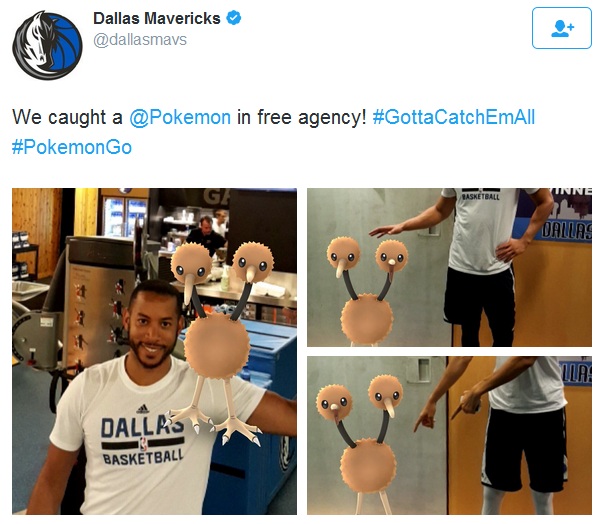 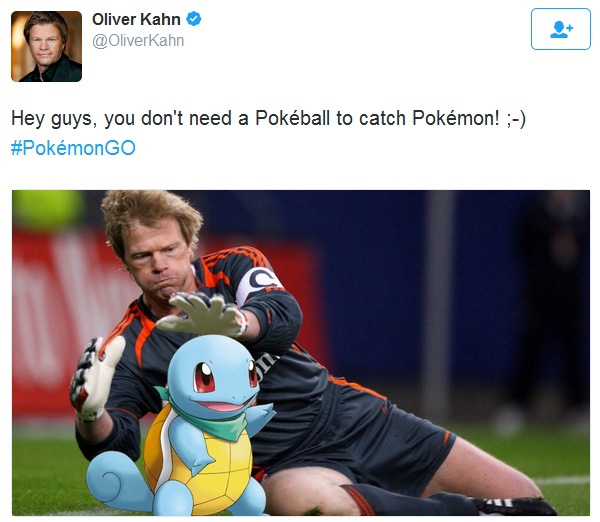 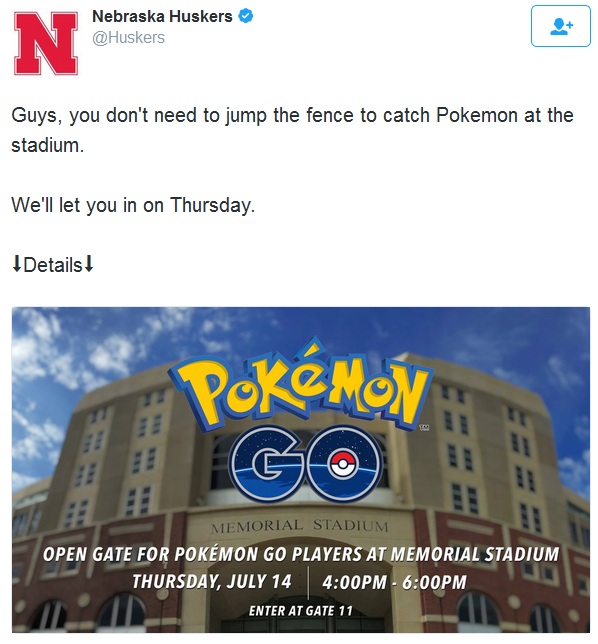 As you see sport teams and athletes across the world were quick enough to jump on board with Pokémon sensation and use the advantages the game offers in their social media marketing efforts.

That last tweet is very interesting and a perfect segway to the rest of this article.

Nebraska Huskers had to resolve the problem they faced when Pokémon GO players tried to jump over their stadium’s fence and catch Pokémon that were hiding inside the massive stadium.

So Nebraska Huskers, in collaboration with the local police, decided to organize a Pokémon GO event and allow fans to enter the stadium. They were not the only sport brand who did this, who solved the problem Pokémon GO brought by embracing it and having fun. That type of problem solution gathered them positive points from their current fans and their future fans who attended the event. 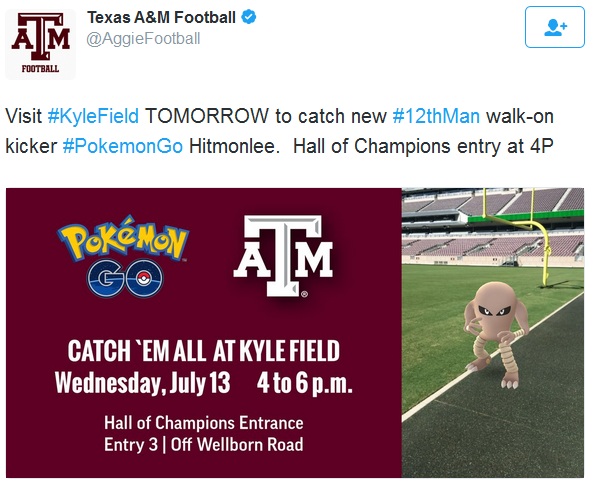 Texas A&M football team experienced same problems as Nebraska Huskers and they also decided to solve the issue by opening their stadium gates and invite their fans to come in and join the Pokémon hunt inside their favorite’s team stadium, Kyle Field.

The results? Over 1500 fans arrived to the event.

Fans also had the privilege to enjoy the experience of walking inside Kyle Field.

“I wanted to stand inside Kyle Field. Last season I sat above the tunnel for the Alabama game, but standing out here on the field, it’s a completely different perspective.” – John Edwards, a junior at Texas A&M.

That a very powerful marketing message. Texas A&M sent this message when their football players joined their fans in the before mentioned Pokémon event.

Receiver Kemah Siverand and reserve quarterback Conner McQueen participated in the event. McQueen also shared the video of the event on his official twitter profile. 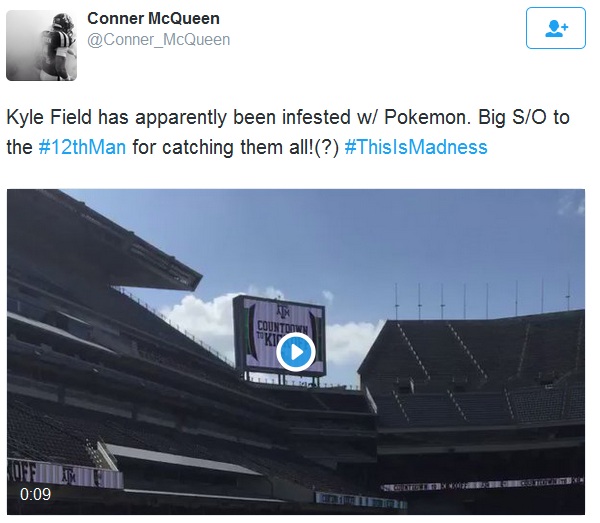 The event become even crazier when a rare Pokémon – Hitmonlee appeared and crowd of people rushed to the location where they had the best chance of catching it.

Jason Cook, Texas A&M’s senior associate athletic director for external affairs was expecting a good response, but he admits that even he underestimated the passion of Pokémon Go players:

“Frankly I’m shocked [by the response]. We posted it on social media overnight, it’s in the middle of summer in Aggieland, not a lot of students here, not a lot going on. I was thinking, ‘Well, maybe we’ll get a couple hundred.’ We’re well over 1,000. It just shows you what kind of cultural phenomenon this has become in a couple days and also how special Kyle Field is, too.”

Atletico Madrid and France striker Antoine Griezmann is well known for his passion for gaming. During Euro 2016 he was often “caught” playing Football Manager. Fans of this game surely enjoyed watching him describe how he plays it, what are his tactics, etc. They related to him. So no wonder he joined the Pokémon GO. He is having fun and showing to fans that he would not be a fish out of the water at their pizza-PlayStation party. Ok, maybe he couldn’t eat pizza midseason. 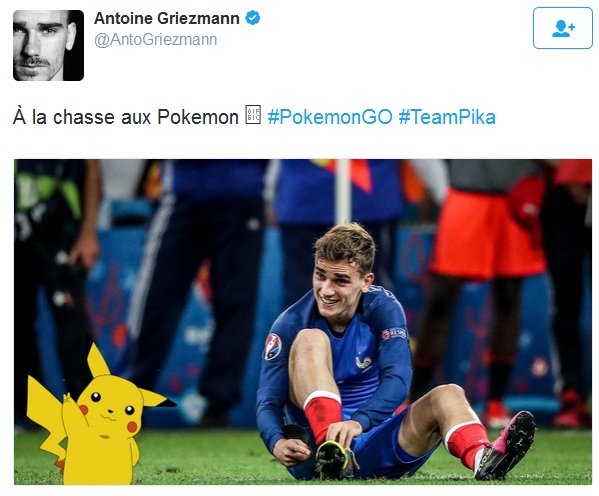 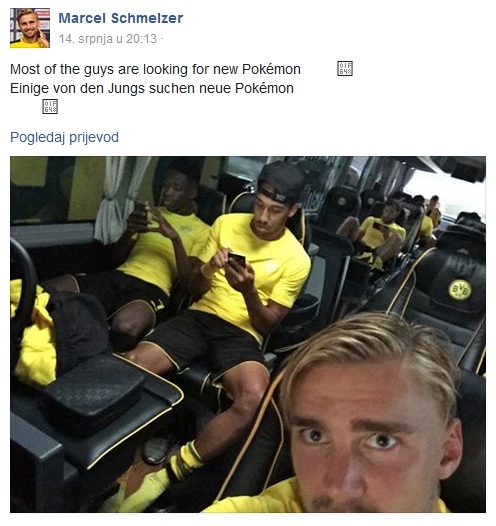 Football is naturally not the only sport that saw the massive possibilities Pokémon GO offers for marketing. 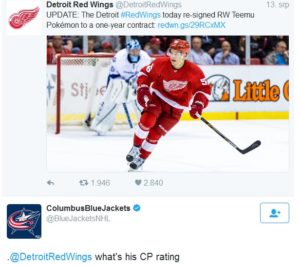 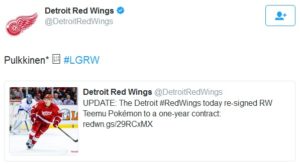 Who believes them it was an honest mistake? I don’t, but I don’t care! It is an excellent mistake.

Our browsing of Pokémon GO marketing continues with Anaheim Ducks. They decided to invite their fans to catch a Pokémon inside the team’s official store. Any fan that manages to do so and provides a photo evidence will get a free Ducks’ scarf. Response was good and over 30 fans caught a Pokémon and earned their Ducks’ scarves. And they surely bought some other Ducks’ gear. This is one of the most popular ways to combine Pokémon GO’s success with business’ success. 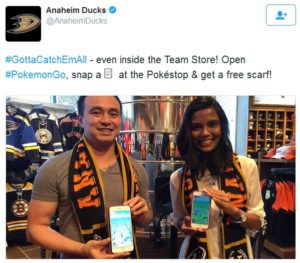 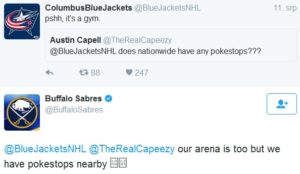 There is something very loveable about two teams official social media accounts behaving like two friends on Twitter. They wouldn’t do it if they knew people dislike it. I must admit I still have a kids imagination and I almost imagine 2 teams mascots tweeting each other (Team mascots as limited Pokémon characters, anyone?) 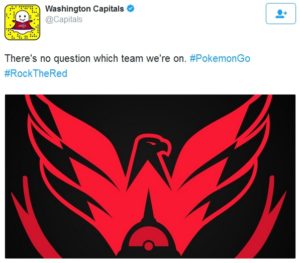 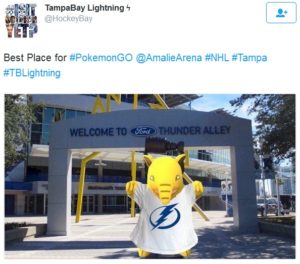 How about limited marketing campaign with Pokémon characters in team gear? Rare Pokémon is a wanted Pokémon. 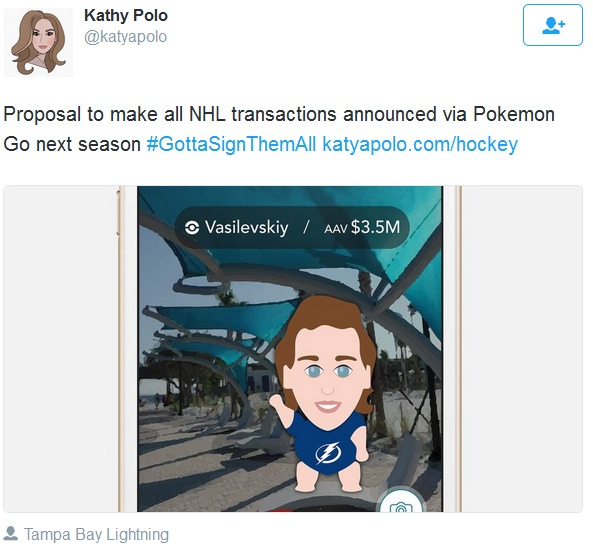 Even fans chime in with their own suggestions how teams can engage fans on social media with Pokémon GO.

After the NHL our browsing continues in the NBA. The Sacramento Kings are known to lead the way in the NBA when it comes to the latest trends. That is why nobody was surprised when they became the first NBA team to host a Pokémon GO event. Same as the before mentioned college football teams, the Kings also opened the doors of their Sleep Train Arena where they have Poke Stops. They even created a Facebook event, where their fans could RSVP the event. It was another way Pokémon GO offers to brands to appearing closer and more relatable to the fans and not just a distant entity. 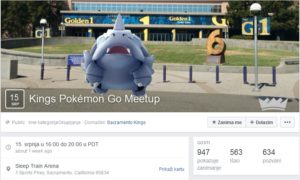 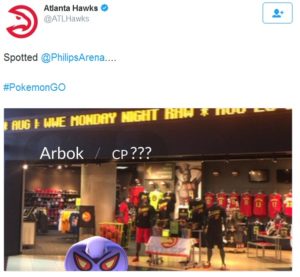 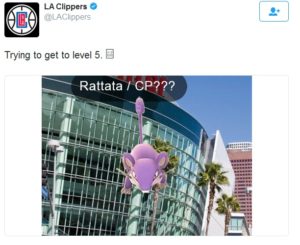 And let’s finish this browsing with the NFL

One of the most interesting social media exchanges happened between bitter divisional rivals Chicago Bears and Minnesota Vikings. It was once again my favorite, “teams are like us” fun fan engagement.

Who knew you can get dominated in Pokémon GO marketing on social media: 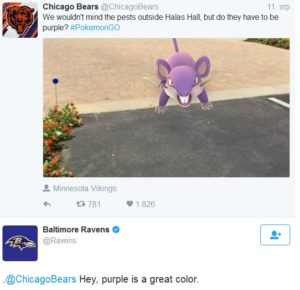 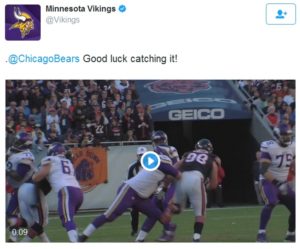 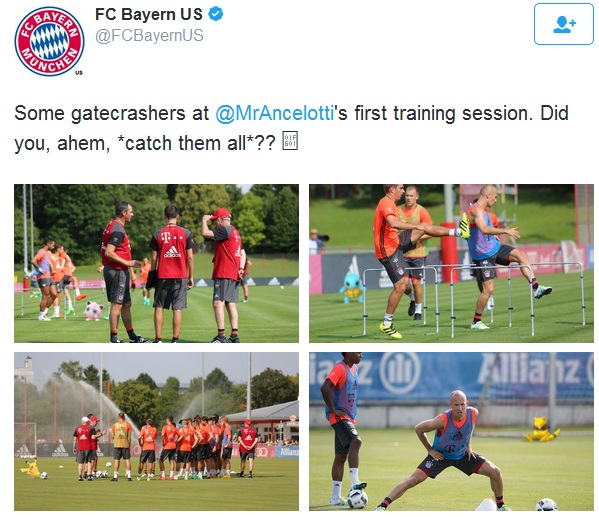 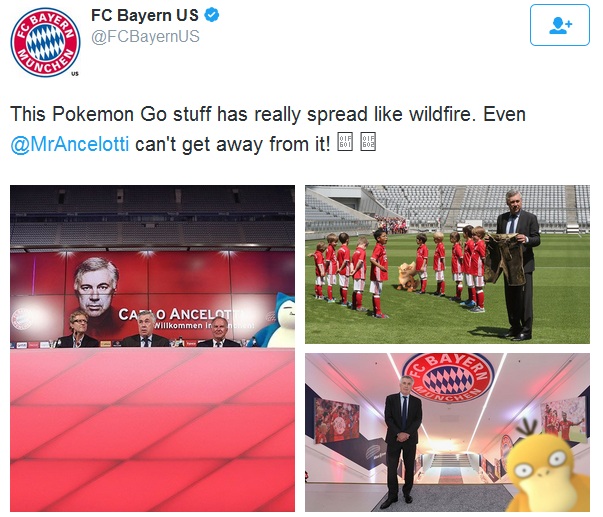 Will their sponsor – Microsoft be happy though? 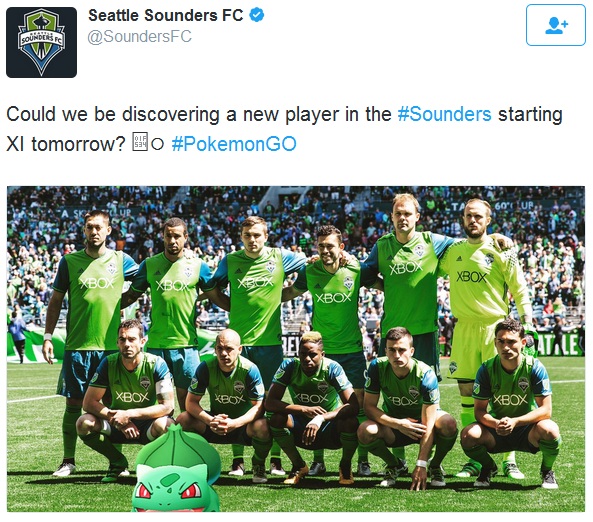 Pokémon GO usage in social media promotions has to respect rules of those social media platforms. Pokémon GO itself has some rules. Same as any other marketing attempt Pokémon GO posts or campaigns have to be done creatively, with respect to fans that are also Pokémon GO players.

As in any other social media campaign it is very important not to overdo it.

Pokémon GO is here to stay for some time. Nintendo and Pokémon GO developers Niantic profited so much from this game that they would be insane not to expand it and make it better and more profitable.

I fully expect for Pokémon GO to grow and offer sport marketers even more possibilities than it does now.

Simply by going through all those posts I had at least few ideas of my own what can be done next. You probably got several ideas yourselves just by reading this article. I’m sure that the most of sport marketing professionals have many ideas they can’t wait to publish, to quote Hamilton the musical: “There is million things (they) haven’t done, but just you wait!”