How Will Sponsorship of RB Leipzig Impact Red Bull’s Brand??

Celtic and Rangers, big Glasgow rivals, whose rivalry goes well beyond football, negotiated sponsorship deals together for over 14 years. These two teams in 1999 decided they must have the same sponsor, because their fans had such hate for their rivals, that Celtic’s shirt sponsors would experience a massive drop in sales among Rangers’ fans, and the other way around.

This situation forced big rivals to work together. Similar situations are present worldwide, but maybe the most interesting one comes from Germany and it gathered worldwide interest in 2016.

I can’t believe it took me so long to write about Red Bull, arguably the biggest sponsor in the world of sports. They sponsor a multitude of sport clubs and sport events. FC Red Bull Salzburg, RB Leipzig, New York Red Bulls, Red Bull Racing, Red Bull Air Race World Championship‎ and Red Bull Rampage to name a few‎. Click on the links above to see the rest.

In the last decade Red Bull’s racing section dominated F1 with both constructors’ and drivers’ championship titles for four straight years between 2010 and 2013.

Now, there is a new Red Bull sport brand that has the potential to grow even bigger than their Red Bull Racing brand – RB Leipzig. But it was not as easy as it looks.

The Most Hated Club in Germany

As I stated above, in May of 2016 Forbes reported that Red Bull experienced a 16% growth in the German market. But that was before one major event – before the RB Leipzig officially joined the top rank of German football.

The problem lies in the fact that majority of German fans not only dislike, but actually hate RB Leipzig and everything they represent in modern football. And that hate is directly related to Red Bull’s involvement with the club.

To explain why this is the case I have to go back to 2009, when RB Leipzig didn’t even exist. In Saxony there was a fifth-division club SSV Markranstädt that operated under everybody’s radar, except Red Bull’s radar. The company decided to make a bigger impact in football and they bought the club’s license, changed the club’s name and image altogether.

Why didn’t they just buy a 1. Bundesliga club and changed their name? Well, they couldn’t. German Bundesliga rules strictly forbid it. The rules say that clubs in German football can’t be named after the sponsors and according to the famous “50+1” rule the fans of the club must have at least 50%+1 share of club ownership. Exemptions are clubs like Bayer Leverkusen and Wolfsburg, whose investors have been involved with the club for more than 20 years. Since Red Bull couldn’t name the club Red Bull, they decided to call the club RB Leipzig, where RB stands for Rasenballsport, meaning “lawn ball sports”. Right. They knew everybody would still call the club Red Bull Leipzig.

The “50+1” rule was a little bit more difficult to outsmart, but the Red Bull succeeded.

For example, Borussia Dortmund has 139,000 members that have the power of veto in club’s decisions. Membership in Borussia Dortmund costs €62 per year, providing every fan a possibility to own a part of their beloved club. At RB Leipzig, €1,000 a year buys you a “gold” membership, but it still doesn’t make you a voting member. Even after the club was forced by the German FA to restructure their membership to earn a license for the 1. Bundesliga, they still only count 17 voting members. These members may be fans of RB Leipzig, but they are also Red Bull’s employees or associates. RB Leipzig managed to avoid the fan control of the club. Since this is what makes German football unique and since this is a great source of pride for German football fans, it is now clear why other fans hate RB Leipzig.

RB Leipzig already experienced hate from opposition fans in the lower leagues of German football. Long before they joined the 1. Bundesliga. In 2.Bundesliga a campaign called “Nein zu RB” (No to RB) was conducted by fans of several “Traditionsvereinen” (Traditional clubs) including Kaiserslautern, 1860 München and Nürnberg. Dynamo Dresden fans showed their displeasure with Red Bull’s involvement with the club from Leipzig by throwing a severed bull’s head on the pitch during a game, while Union Berlin fans dressed in black plastic ponchos and stood still in silence for 15-minute protest before the kick off.

When RB Leipzig earned their promotion to the top flight of German football, the controversy that surrounds the club got a wider attention. Borussia Dortmund fans announced they will protest RB Leipzig’s commercial structure by not traveling to their away game in Leipzig, Bayer Leverkusen fans attacked RB Leipzig’s bus with “paint bags” and 1 FC. Köln fans displayed “We Hate RB” banners all over the city and delayed the kick off by blocking the RB Leipzig’s team bus. 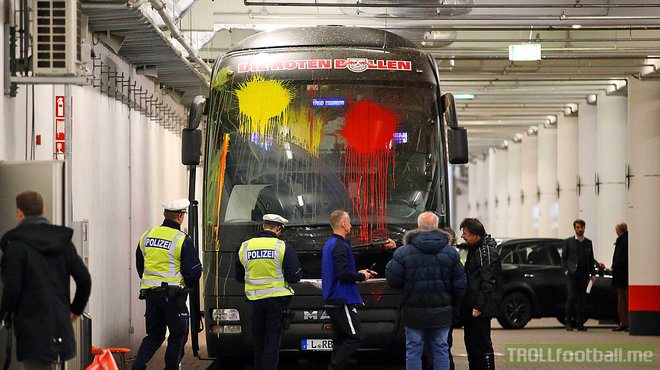 “Traditional clubs like Dortmund, Schalke, Cologne and Bayern Munich want to make money and play football. Of course Dortmund makes money, but we do it in order to play football, but Leipzig plays football in order to sell a product and a lifestyle. That’s the difference. Red Bull Leipzig is leading the whole system of football to ad absurdum. Red Bull want to sell a product and a brand. This is the basic difference.” – Jan-Henrik Gruszecki, filmmaker and organizer of Borussia Dortmund protest

No clubs located in the area that was located in the former DDR competed in the Bundesliga since 2009 and Real Madrid’s and German international midfielder Toni Kroos was the only member of Germany’s World Cup winning team, who was born in the Eastern part of Germany. Kroos himself supports the RB Leipzig project lead by Red Bull’s co-founder Dietrich Mateschitz and the growth of football in forgotten eastern parts of Germany.

“Mateschitz could also buy three yachts or four jets, but he’s into football. They have no star who has cost 30 or 40 million euros, and I’m sure if this team goes through a shopping street somewhere in Germany, people would not recognize three players.” Kroos told Kicker magazine recently.

Nobody can doubt that RB Leipzig is excellently lead by its sport director Ralf Rangnick. Average age of current squad is 23 and their marquee signing Scottish prodigy Oliver Burke is only 19.

“It seems some people are more content with moaning about us than coming up with a workable way in which the 50+1 rule could be reformed” – Matthias Kiessling, RB Leipzig blogger

“If it (RB Leipzig) works, it is good for all football, not only for the East” – Uli Hoeneß, former Bayern Munich president

RB Leipzig and its controversial relationship with Red Bull does hurt the energy drink’s company brand and image in Germany. At least it does among the fans of opponent clubs. Based on significant sales drops other sponsors experienced worldwide among the fans of rival clubs, it would be naive from Red Bull not to expect the same from rival fans in Germany.

Even though the controversy related to RB Leipzig’s connection to Red Bull gathered more audience, football fans in Germany already expressed their displeasure with Red Bull during the period when Red Bull experienced this rather impressive 16% growth. So far Red Bull has been a role model sport sponsor worldwide and as such they surely made this controversial move after careful calculations and considerations.

Being a smart sport owner with years of experience and success, it is no surprise that Red Bull’s excellent club running model works. Their youth development model and success would be praised almost everywhere else, except in Germany. And since RB Leipzig’s incredible on-field performances probably caught even Red Bull by surprise, it is expected that hate the club and brand receives won’t materialize into a great deal of negative impact in Germany as much as it will promote the brand worldwide among the football fans with years to come.

Same as it did with other Red Bull’s sport projects.